For continual update of progress in Rwanda consult our website

Staff of Africa AHEAD – Rwanda

The objective of Africa AHEAD in Rwanda is to relieve sickness and poverty and promote good health by empowering communities of Rwanda  by:

(1) Disseminating, replicating, adapting and advocating for the scaling up of the ‘Community Health Club (CHC) Model’ to improve standards of living through community health and hygiene, social capital, self-reliance, poverty alleviation, knowledge and sustainable livelihoods;

(2) Developing capacity of local and international NGOs, Agencies and Government departments to use the ‘CHC Model’ to implement community projects directly where appropriate;

Our ‘5 x 5′ Strategy is aimed at reducing 5 critical diseases in 5 million families in 5 countries at less than US$5 per person in the next 5 years. 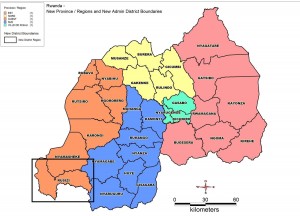 The CBEHP programme in Rusizi District will provide a controllable ‘experiment’ in the use of the CHC Model that will promote accurate monitoring and collection of data while also providing the required sample sizes for an objective evaluation of the CHC approach to be undertaken.

Short description of the project:

The Ministry of Health (MoH) in Rwanda is currently implementing the Community-Based Environmental Health Promotion Programme (CBEHPP) which is in the process of establish Community Hygiene/Health Clubs (CHCs) in all 15,000 villages across Rwanda.  The CHC model, as originally developed in Zimbabwe by Africa AHEAD (AA) in 1995, has in-built monitoring systems and tools. Although the CHC methodology has been adopted in a number of countries in rural and urban settings across East, West and Southern Africa over the past few years, Rwanda is the first country to be rapidly scaling up the model nation-wide.  To date over 90% of the 15,000 villages in Rwanda have registered CHCs and over 5,000 have trained community members. By 2016, over nine million people (about 80% of the population) should benefit from CHCs if the programme is implemented as intended.

Since 2008, Africa AHEAD consultants have supported MoH to develop the CBEHPP Road Map  (through WSP, 2008-2011) and the CHC Training Manuals (through UNICEF 2010-2011). It is now proposed that a practical monitoring system be established at village level in order to track hygiene behaviour change as the CHCs are established across the country. Africa AHEAD has been requested to assist in setting up monitoring procedures that will enable operational standards to be identified and demonstrated for the benefit of all CBEHPP implementing partners. A web-based ‘mobile research platform’ has been introduced to enable easy ‘real-time’ data collection and analysis using mobile phones, so building capacity for evidence-based policy-making within the MoH to ensure this national programme is rolled out at scale and implemented as cost effectively as possible.

Rusizi district in Western Province of Rwanda was selected to demonstrate the ‘Classic’ CHC Model. Within three years, 150 CHCs will have completed health and hygiene training that will benefit 15,000 direct CHC members (average of 100 members per Club) and with an estimated 75,000 direct beneficiaries (5 family members on average per household) with significantly improved hygiene facilities and behavioral practices  in the home. Specific standards for the ‘Classic CHC’ will be established in order to provide a bench-mark for the national CBEHPP. In Year 1, a sample of 50 ‘Classic’ CHCs and 50 villages with a minimal ‘Light’ version of the CHC methodology was selected randomly, to be compared in Year 3 with 50 Control villages which will by then have received no treatment (i.e. neither exposure to the CHC nor training in health and hygiene). Monitoring the CHC model over three years will determine precisely how hygiene behavior can be improved to reduce the national disease burden in Rwanda and similar countries. Rusizi District will also be used for an in-depth evaluation study of health impact of the CHC approach. It will provide the first independent rigorous research of the CHC approach and will therefore be an important contribution to the international effort to identify the most cost-effective method to achieve sustainable and replicable hygiene behavior change at scale.

There are five main objectives for this intervention:

1. To build capacity in MoH for cost-effective training of communities for hygiene behaviour change

3. To ensure functional and responsible communities exist in 150 villages in Rusizi district

4. To provide a demonstration on how hygiene behaviour change can be sustained

5. To demonstrate a cost-effective Change Model capable of improving family health at scale.

By May 2014 all 50 Classic CHCs were functional and there was an average of 77 members per CHC. Training sessions continued in the CHCs and by October 2014 all CHCs had completed the 20 sessions on target. Average attendance was higher than targeted 69% as against the target of 50%. Many households were making changes in their hygiene facilities and the mid term survey of 650 households shows significant improvement in all targeted activities.

The hygiene targets for this project were all set at 30% for end of Year 1. Five of the 9 indicators had exceeds targeted levels as shown below. By May  2014  when CHCs had only done 10 sessions out of 20 in the training, their hygiene had already started to improve.

The following levels were attained in 50 Classic CHCs:

In 2010 the Community Based Environmental Health Promotion Programme (CBEHPP) was started by the Rwandan Ministry of Health Environmental Health Department which involved the scale up of Community Health Clubs (CHCs) throughout the country.  It was important for MoH to have accurate data to assess the impact of the CHC Model. Being the prime instigator of the CHC Model, Africa AHEAD was asked to assist and requested Gates Foundation to support this research. They engaged IPA (Innovation for Poverty Action) as the evaluation team to conduct a Randomised Control Trial to measure cost effectiveness of the inputs as against the impact both on health and social capital.

There was some doubt if the CHC model could be reliably tested with existing programmes because  implementing partners could not be adequately controlled. Therefore it was decided that MoH with assistance from AA should provide the ‘classic’ demonstration of the CHC Model in 50 villages as it is meant to be done in the manual.  It was decided to construct an imitation of the type of implementation which is sometimes done to mirror what is considered by the MoH (and AA) as a half done job, and this was to be called the Lite arm, undertaken in another 50villages. A third arm of Control villages were to be used for comparison and then given the classic training in two years time after the research.Rusizi District was selected for  the RCT as it boarded on Burundi and DRC and was the least developed area in Rwanda and closest to neighboring country living standards.

The Ministry of Finance supported CBEHPP because it is assumed that there are national savings with a more holistic approach that it is addresses not only diarrhoea but also nutrition, stunting through environmental enteropathy, bilharzia, skin disease and worms and may also minimise ARIs, Malaria, and HIV/AIDS deaths due to early treatment seeking behavior. We are therefore  testing out the hypothesis: the CHC model implemented in its classic form will give greater impact. The classic CHC  will be more cost effective because, although there are more costs to doing it properly there is also more impact, as saving is made on treating diseases which can be prevented.   This research may also inform other countries and contribute to the ongoing debate in the WASH Sector, as to the best practice for achieving hygiene and sanitation behavior change.

After the training of 50 CHC Facilitators in February 2014, weekly health promotion sessions started in the 50 selected villages of the implementation arm of the trail. This began with the registration of CHC member’s, election of CHC committees, village mapping, agreement on meeting days, venue and time in partnership with local leaders before health sessions began.

At community level, the CHC methodology really  involves the villagers. The CHC facilitators, assisted by heads of villages and CHC committees are running sessions on the planned topics in agreement with CHC members and the progress in community organisation is very noticeable. The 24 sessions follow the manual which was designed by Africa AHEAD in conjunction with MoH and Unicef. These 24 health promotion sessions are expected to be completed by August 2014.

CHC activities and progress in hygiene and sanitation behavior and practice

After 3 months of CHC activities, most CHCs have covered at least 10 topics. When you visit villages, you are likely to be welcomed by joyful men and women, who are empowered and self confident from the achievements of their homes: clean homes, hygienic drinking water storage, pot racks (see below), step and wash facilities, clean bedding, kitchen garden, bath shelter in construction with good progress in getting and use of hygienic latrines. We have found that it possible to easy to start off CHCs but the CHC evolves beyond the planned activities  and has a life of its own. When CHC members are together they inspire each other, which pushes all  the CHC members to plan and decide on other beneficial activities and projects.

Hope for the behavior change

Already, private behaviour is becoming a public concern, with the general consensus from the critical mass ensuring that all individuals are discouraged from poor hygiene behaviour in favour of agreed and accepted standards and norms.