‘When CHCs are well established they become a super highway for other development initiatives’ is the response of the Executive Director of Africa AHEAD Zim when he learned of the great efforts by many CHCs in Zimbabwe, which are now running substantial enterprises, and managing to weather the Covid storm.

For example the  Community Based Facilitator for ward 8 in Chiredzi , above, shows  her well established garden and income generating project such as breeding ‘road runners’ (a type of chicken) , turkeys, rabbits and ducks.The CHC was established initially by Zim AHEAD 2007 before being taken over by World Vision who was working in the same district. This club has a deep well which they use for irrigation purposes. 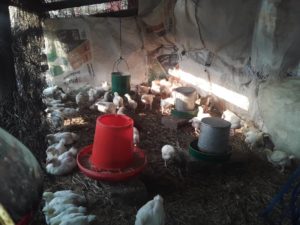 As a sustainability measure, Utsanana Health Club in ward 3 has started  a poultry project in response to the  AA WASH Officer  who said  that the AHEAD approach means that our Community Health Clubs should be educative  not only in terms of health but  should also  bring development to the community. It is refreshing that most the clubs have taken heed of the call, and are starting a variety of enterprises. 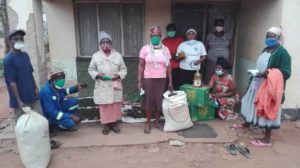 Tapona Health Club in Ward 5 Chiredzi  displays sacks of dried vegetables and groceries soon to be shared amongst members. The CHC facilitator  says, “more people are coming to the clubs and saying they are busy can’t catch up with club sessions but would want to be part of the projects……”  However, the rule in CHCs is that people cannot gate crash and just reap the rewards if they have not completed the CHC training, so they must first go back and do the training before they can join the popular projects. This incentive will  attract more membership and increase level of development in the community.