Africa AHEAD provides handwashing facilities to prevent spread of cholera

Between October and November 2018, Africa AHEAD partnered ACF and lend a helping hand to the City of Harare in the fight against cholera in Harare. UNICEF chipped in by providing soap for Africa AHEAD to promote handwashing at the public WASH facilities in the Harare CBD. The project involved hand washing promotion, general health and hygiene education at 5 busy bus termini that are used by commuting public to and from the cholera epicentre so as to avoid interpersonal transmission of the disease.

Over the 6 weeks period over 110 thousand men, women and children accessed hand washing in Harare through our hand wash stations and over 150 thousand residents were reached with public health promotion messages. 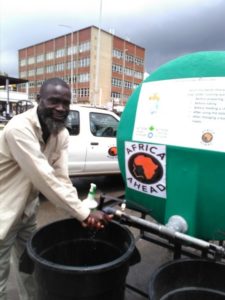 The outbreak which started in Harare due to poor water and sanitation facilities, poor hygiene behaviour and inadequate water management between the City of Harare and the residents was kept in check and only a few cases were reported in the other provinces of the country centrally to what was expected. Africa AHEAD stepped in to help contain the outbreak.

This 6 weeks intervention funded by ACF  at a cost of $32,557.55 has led on to a full 6 month project supported by UNICEF to the tune of $355,417.00 as it was necessary to keep up the hygiene promotion activities in the city.

Africa AHEAD has now engaged 12 extra Hygiene Promotion Officers and deployed 5 project vehicles onto the project which will run until July 2019.