Following the results of the Randomised Control Trial, the Directors of Africa AHEAD visited Rusizi District in December 2017 to see for themselves if the Community Health Clubs had made any impact on hygiene in the 150 villages which were now all engaged in the Community Based Environmental Health Promotion  Programme. We visited the village of Nyabeho, which was one of the most active of the CHCs in the District, where every single one of the 110 households were active in the CHC and were there was universal coverage of hygienic latrines, many of which were Ventilated Improved Pit latrines .  Nyambeho, was  one of the 50Classic villages that received their full 24 sessions of training over one year ago. The village is one of the most remote,  is situated in steel hilltops of Rusizi district bordering on Burundi where access was difficult. The  success of Nyambeho is attributed to a highly dedicated Environmental Health Officer and good village leadership. A case study has been done which compares it to a nearby non CHC village demonstrating how the CHC has changed the hygiene of the villagers. See poster by Amans Ntakarutimana

As we arrived the enthu 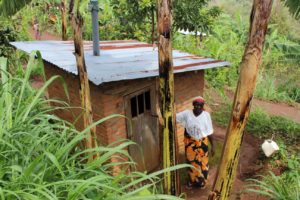 siasm of the CHC members was palpable. The village head showed us round their village, pointing out the VIP Latrine at each homestead, the numerous wash hand facilities and management of solid waste.

They displayed a map of their villages showing the extend of the uptake of sanitation which seems to be almost universal. They were singing and dancing their health songs and when the rain poured down in sheets we all dashed for cover in the meeting hall that they had constructed for the purpose.

Thinking this was an unusually active CHC I was surprised to find the same energy at the next CHC, the village of Giciramala, one of the 50  control villages which had only just finished the six months weekly training.  We were given a concert of community health songs, dances and poems which would have made any mother proud. 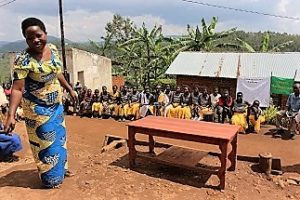 Again the conviction of the leaders in their speeches made us realise how the programme had impacted  on the organisation of the village. Although hygiene levels are still much lower than in other countries such as Zimbabwe, the perception of the people themselves is that they have made great progress. We also visited Rujagi a Lite village where they had been given 8 sessions only until the final year when all 150 villages were trained to the same level as the Classic intervention villages. The Lite and control were noticeably less advanced in sanitation than the Classic village which had been in the programme for two years longer.