Minister of Health called for CHCs nationwide in Zimbabwe

In the Water Policy of 2013, the Government of Zimbabwe directed that every village should have a functional Community Health Club (CHC) that seeks to empower communities to take full responsibility in preventive health. The National Sanitation and Hygiene Strategy of 2011 states the Community Health Club approach as the methodology through which Participatory Health and Hygiene Education should be channeled.

The Minister of Health Dr Parirenyatwa Minister  wanted   to see for himself the benefits of the CHC Model and accordingly as visit was arranged by the Environmental Health Department to visit Chipinge District in Manicaland, where the  Cholera Mitigation Programme funded by USAID and implemented by Zim AHEAD was able to show case the classic CHC programme.

Upon arrival at the Clinic, the Minister was welcomed by a large committee of local representatives, and District Medical Officer gave  an overview of Chipinge District where  CHCs  were operational  in the 10 wards.  She highlighted that although Chipinge was in a state of malarial outbreak in the areas where the clubs were running there was no increase in cases.

The delegation then went to see Chigure Club where the members had gathered at their regular venue.  The meeting place was a model site and included permanent seating and even flooring plastered by the CHC members, so no one sat on the ground. 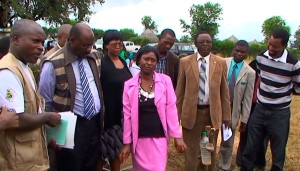 The community based facilitator (CBF), an ordinary village woman who leads the club,  gave a history of the Club and how it was started when Zim AHEAD came into their village. She highlighted that the CHC project had changed their lives as it inculcated a self belief system that weaned them off the dependency syndrome.

People used to pooh everywhere, and we said to ourselves,  ‘People what can we do with this poo?  – it is everywhere.’

There were only 4 Blair toilets in the village and it was easy for the flies to go into pit latrines. Because of lack of knowledge, the people used to run away from the health workers  because they thought the health worker were bothering them.

Then Zim AHEAD came and said, ‘Come together and we will teach people about health’, and they started with the women. The village people started to listen to what the health workers were teaching people. The whole village got the knowledge.  Mr Muche and Mrs Kumbula taught people once a week for two hours and what we learnt,  we had to do at home – so we built latrines, handwashing tippy taps and many things like rubbish pits. That was the policy, and we taught people not to poo everywhere.  Whatever you eat makes you poo and the flies go there and it is going to be a health hazard, you get sick! After the many teachings  we got certificates. Allelujah!

She told how they had contributed their own money and purchased cement to make a permanent structure and a Blair Toilet at the venue. The village also received cement from World Vision to partially construct 39 toilets as they were only 3 bags each for the 39 toilets, but due to the knowledge they had acquired from the CHC they were able to construct an additional 18 from their own resources. The club has 72 members of which most are women as there are only 6 are males including  the kraal head.

She went on to tell the gathering that disease transmission had reduced as compared to times before the CHCs. The club had appointed some elderly members who assisted the CBF in supervising the village to observe compliance and adherence to learnt health and hygiene behaviour. She also mentioned that the CHC has become a way of life in her village and 7 months after ZimAHEAD withdrew at the end of the USAID funded project,  the CHC is still going strong.

Mr. Matimati the Zim AHEAD Program Director spoke of how the Organisation empowers communities through Health Clubs. He pointed out that most diseases that afflict our communities are preventable and through the vehicle of CHCs communities can be empowered to deal with them on their own as it will be viewed as a homegrown and not prescribed by outsiders but it will be the community itself monitoring each other as neighbor becomes the police of neighbor.

Through common unity and peer pressure CHCs make societal changes wherever they are implemented. The CHCs become effective because of the applied health method where after sessions participants have practical work to do at their homesteads. Sustainability of the CHCs was ensured as villagers took it upon themselves to prevent and control diseases with technical support from the local health providers going up through the structures at District, Provincial and National Level. The certificates that each CHC member gets after completion testify to the fact that a person has completed sessions and that they actively participate in hygienic practices for the rest of the life.

Chigure Community Health Club is just one of 114 such CHCs formed on the one year USAID funded project up to 2013.

Mr. Matimati further stated that ZimAHEAD has not only worked in Chipinge District – both urban and rural, but also in the towns of Mutare, Chimanimani, Bindura, Chiredzi, and Masvingo, which has been cleaned up thanks to the CHC campaigns to keep the towns clean. Since 1999 Zim AHEAD has worked  in the rural communal lands of  Tsholotsho, Makoni, Buhera, Mberengwa and Gutu Districts.

The delegation visited the home of Mrs. Mhlanga who is a club member. At the homestead the kitchen was viewed which was typical of thousands that are now throughout Zimbabwe as a result of the CHCs. It had shelving along the walls, with all the cups and plates displayed showing that each person has their own utensils to stop spread of germs.

They saw the water protected with a good lid and the ladle to take the water. The minister also went into the spotless Blair latrine and was delighted by the standard of hygiene.

A short drama was presented to show how club had started, depicting the feedback meetings, the  registration of members and a CHC session was enacted showing the benefits of being a club member.

There were several people enacting the part of people who refused to join health clubs and continued in their unhygienic ways until they fell ill. Upon falling ill they sought different remedies from religious leaders  to traditional healers (nanga’s) until, at their wits end, they seek medical intervention. At their Clinic they are told that they have not been bewitched as they thought, but have fallen ill due to their filthy practices which have led to their suffering from diarrhoeal diseases. They then join the health club and are converted to good hygiene and from then on they are healthy.

After the tour of the homestead the Minister gave a speech praising  the effort that had been made at homestead.  He went on to say that there was need for use of fuel efficient stoves to save on firewood. The siting of Blair toilet should ensure that even at night people do not resort to going behind the house for fear of the long walk in the dark. He discouraged the use of cow dung in houses as it predisposed to environmental enteropathy which causes stunting in children. The Minister commended the efforts that had been made by ZimAHEAD. He said that there was need to document this case study and to learn from the villages and then scale up to national level.

The Minister further cited that in Rwanda CHC had been adopted at a national level that each and every village has a CHC as the main tool for disseminating primary health care information. The CHC technique should be revisited in the light of new information coming up of how stunting in child growth may be a result of damage occurring on the ileum (intestine) as a result of children under 2 taking in harmful pathogens in cow dung.

There is a  potential of using the CHC methodology in the SHINE Project which is researching how to protect young children by providing a clean eating environment. After seeing how clean the kitchens are in CHCs, encouraging the scale up of model kitchens  is an obvious focus for the Ministry of Health nationally.

The vote of thanks was given by a representative of the Member of Parliament who was not able to attend due to Parliament commitments and had sent his apologies to the Minister of Health and Child Care. He thanked the Minister for coming to the district then went to highlight the challenges they were facing in relation to health in the District. The delegation included Director of Environmental Health Department Mr Goldberg Mangwadu, 2 Senior officials in the Minister’s office responsible for Policy Planning and Public Relations in the Minister’s Office, the Minister’s aide and the Personal Assistant, Ms. Gerede Community Nurse from the National Office, the Provincial Medical Director Dr. Mafaune, the Provincial Environmental Health Officer Mr. Mufambanhando, the Provincial Health Services Administrator Mr. Charangwa, the DMO Dr. Kuwengwa, the DA Mr. Seenza, the DEHO Mr. Makundenyika and his staff, local leadership which included the Kraal Head and Councilor and the ZimAHEAD Program Manager Andrew Muringaniza and Country Director, Regis Matimati.