Stories from the field: A visit to granny

Stories from the Field 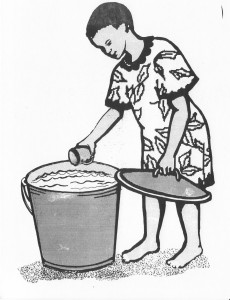 A 52 year old woman Mary Chinthenga is an active member of Utsanana CHC. She joined the club on 13/02/13. She is attending the club sessions regularly. During the school holidays Mary brought her granddaughter Shanyce Chinthenga to the health club venue for a routine club session. Shanyce is a grade 3 pupil at Bindura Junior School. At the school she is also a health club member in the School Health Club. On the day in question 01/05/13 the topic was on Water Sources.

During the session members were being shown the pictorial codes and discussing as the usual PHHE procedure. Seeing a picture of a person putting a finger in the bucket, Shanyce told her grandmother that she was doing the same when fetching water at home. She confessed that she was doing this not knowing that she was contaminating the water which is used by the whole family. When she went back home she also told her story to the parents and friends. She is now visiting her grandmother frequently and each time she pays a visit, she demands to know the topics covered at the club while she was away. She told me that she also educated their neighbour who has an open well about water contamination resulting into the spread of diarrhoeal diseases.