Jason Rosenfeld, who worked with Africa AHEAD from 2007-2010, is now at the University of  Texas Health Science Centre, San Antonio, as Senior Program Coordinator, and has sucessfully transplanted the concept of the CHCs from Africa to the Caribbean and shares with us this report.

In March 2012, the Center for Medical Humanities & Ethics (CMHE) at the University of Texas Health Science Center at San Antonio, in collaboration with the Children of the Nations (COTN) organization and the Universidad Iberoamericana (UNIBE), trained the first six Community Health Club (CHC) facilitators from five communities in the Barahona Province, Dominican Republic. Those facilitators will start the first CHCs in Latin America and the Caribbean in an effort to contribute to a reduction in water, sanitation and hygiene-related health conditions and demonstrate the effectiveness of this methodology in laying a sustainable foundation for community-based health and development. With cholera poised to pose a continuous threat from across the border in Haiti for the foreseeable future, it is hoped that this small pilot project will be the impetus for a rapid expansion along the remaining bordering provinces of the Dominican Republic and ultimately across the border into Haiti.

Since 2010, the CMHE has been operating mobile clinics in Independencia Province, providing free medical care to some of the most vulnerable communities in the Dominican Republic. While providing health care services to residents of bateyes (unincorporated settlements of low-wage Haitian and Dominican laborers and displaced Haitian migrants), students and faculty realized that to truly make a positive health impact in these communities, a long-term, sustainable approach would better address the underlying causes of locally prevalent diseases. At the same time, the cholera epidemic that began in the Artibonite Province of Haiti in October 2010 rapidly spread, resulting in over 531,000 confirmed cases and over 7,000 deaths in Haiti[1], and almost 20,000 cases (predominantly border provinces) in the Dominican Republic[2]. In response, the CMHE began partnering with COTN to pilot the CHC approach in the five communities where COTN has been operating since 1997.

After a year of research, material development and planning, residents of the communities of Altagracia, Algodon, Los Robles, Don Bosco and Pueblo Nuevo are set to join the international network of Health Club members who have used health education as an entry point to holistic community health and development. Over the past year, formative research has been conducted to recreate the drawings used during the weekly health education sessions so as to better mirror life in the Dominican Republic and two artists have been commissioned to complete the approximately 270 drawings. 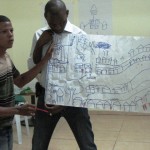 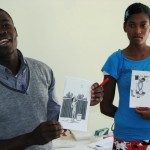 In addition, baseline data has been collected from almost 400 households across the five communities to demonstrate the impact of the program and its adaptability to the local context in Barahona. The first phase of this research was completed in June 2011 when three M.D./M.P.H. students from the UT Health Science Center collected data from 88 households in Altagracia. The results of this research were instrumental in identifying the need for a CHC program, in advocating for the required resources for this pilot project, and have been published in Fall 2011 issue of the Journal of Global Health. In March 2012, the remainder of the baseline data was collected by eight M.D. students from UNIBE, with supervision from CMHE staff member Jason Rosenfeld and UNIBE’s Dr. Francisco Paulino. In one week, these eight students worked tirelessly to visit over 300 households in Los Robles, Algodon, Don Bosco and Pueblo Nuevo, completing the work started by their colleagues from the Health Science Center the previous summer.

At the same time this research and program development was being completed, Mr. Rosenfeld was introducing the program to the five communities and mobilizing them to join their local Health Club using the time-tested participatory activity, Nurse Ana (also known as Nurse Tanaka in Africa).  In this activity, community members act out a role play at their local clinic, with one person acting as Nurse Ana and the rest as community members. Patients visit the clinic with common conditions from their community; Nurse Ana diagnoses the condition and shares his/her thoughts about the causes of the condition. The purpose of this activity is to learn about each community’s perceived health issues, while demonstrating that the majority of the conditions can be prevented through improved water, sanitation and hygiene practices.

The response from each of the five communities was overwhelmingly positive, so the decision was taken to move ahead with implementation. Therefore, from March 12-15 six community-based facilitators, two nurses from COTN, and the COTN Field Officer, Dr. Charinson Feliz, participated in the first of two training workshops for this project. During this four-day workshop, participants were trained in the CHC methodology, best practices in how to mobilize their community and start a CHC, and how to use the CHC Toolkit and participatory activities to conduct the first two months of health education.

During this workshop, participants were given an opportunity to create their own Health Club, which they named Club de Salud en Acción (Health Club in Action) and created the slogan, ¡Salud Total! (Total Health!). The remainder of the training will be completed in May/June 2012, when students from both Universities will also collaborate to conduct two studies: a process evaluation of implementation to date and an intestinal parasitology study as part of the overall impact evaluation.

Over the course of the next year, Health Club members in these five communities will participate in weekly health education sessions and will begin making incremental improvements to their households and communities.

The goal of this program is to prevent the transmission of preventable conditions such as intestinal parasites, skin diseases, malaria/dengue, and diarrhea, most importantly cholera. So far the six CHC Facilitators have mobilized and registered over 150 people across the five communities and are set to begin the health education sessions in the coming weeks. Stay tuned as this exciting new program grows. ¡Salud Total!