In November 2012, a new program was launched  as part of the UNICEF Urban WASH Fund from DFID. ACF partnered with Zimbabwe AHEAD in Chipinge Town, and the project is now managed by Project Officer, Rangandu Mushipe. After six months the Chipinge Urban project now includes 10 school clubs, 12 market place clubs, and 29 community health clubs with a total of 2, 144 registered members, and is impacting  visibly on the small town which has never been so clean. 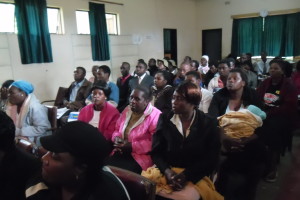 Mr. Mushipe has coordinated Clean-up Campaigns in four wards, resulting in the removal of 29 tons of refuse and the cleaning of major business centers.  In addition, certain clubs are now working together to clean the alternative waters sources in their area on a weekly basis. This is community motivation at an unheard-of  level in a country where citizens are seriously  demoralised by lack of  services from government and councils, often refusing to pay their rates as they receive little service.

Other activities include the development of a WASH Project Management Steering Committee as a measure to ensure the continuity of WASH activities during the implementation period and after the donors are gone. Club members are also contributing to “WASH funds” that will be used by the club to purchase WASH related items. For example, one community health club in Chipinge contributed three dollars per member, and each club member received three cups for their household in order to put the health club lesson on using individual utensils into practice.

Mr. Mushipe plans to continue coordinating Clean-up Campaigns and holding monthly progress meetings with community based facilitators, school based facilitators, and stakeholders. He has also planned a meeting with the Ministry of Gender to address challenges in male attendance at club meetings  because it is important that men as well as women learn how to protect themselves from common diseases.  It is usual that 80% of the CHC members are women, because the sessions tend to focus on hygiene and this does not attract men  who prefer to leave this type of issue to the women. Hence when there was a cholera outbreak in 2008/9, far more men than women died from the deadly disease because they didn’t know how to protect themselves.

Another challenge is how to  schedule the weekly CHC meeting so as not to loose members due  to city water rationing. If you are wondering how water rationing affects the attendance of CHC meetings, this is what happens. Residents of Chipinge town seldom have  water gushing out of their taps when they turn them on.  The whole piped system is dry, except for perhaps one day a week when the water is turned on by the municipality, and the water begins to trickle through the pipes. At this point, what ever you are doing, you abandon and rush home to fill up every conceivable container, including your bath, so that you have enough water to flush the toilet for the next six days, as well as for washing, drinking and cooking purposes. Many times the water arrives unannounced, and when the word spreads, those attending meetings rush off home, thus missing some of the sessions planned in the CHC training.  Such are the continuing challenges of urban living in Zimbabwe. Hence the need for urban CHCs to enable residents to survive in a healthy environment despite lack of normal facilities.