Evolution of CLTS in Sierra Leone

How to evolve CLTS was the challenge  we were given. CLTS was first introduced into Sierra Leone five years ago in 2008, and Unicef has been  coordinating implementing partners here  to an impressive degree with a frenzy of triggering across the country. However, despite the mushrooming of latrines, there has been doubt as to the ‘sustainability’ of the approach (ie how many latrines are still standing. In addition it has been doubted whether any health benefits have accrued to the population which seems to have built latrines but have not changed their hygiene and appear to have  little understanding of the reason for this activity.

Africa AHEAD was asked to do a Rapid Rural Appraisal and our findings were every bit as disappointing  was was expected.  Having done a spot check on 100 latrines in six different sites, randomly chosen from villages that were triggered in 2009 or 2010, we found not one latrine was covered and most were ‘fly factories’. Far from breaking the fecal-oral route, the shoddy shacks with no slabs, over pits as deep as mine shafts, which had been constructed by thousands of villages  across the countryside, have become, in effect,  ‘fixed point open defecation sites’  and  many abandoned ones are deathtraps. This  makes a mockery of the ostentatious billboards at the entrance of many of these villages, declaring that the village is ‘Open Defecation Free’.

For a country that has the unenviable misfortune to have a rural population where  50% of household heads are completely uneducated with not even a single year of school, the signboards in English are merely a photo opportunity for the donor. They mean nothing  to the villagers and  signal only that the authorities are satisfied that the project has been successfully concluded. The villagers relax, as  no further effort is required to satisfy the strangers and their weird request to build latrines.

We attended an impressive display of this one day CLTS  ‘triggering’ of a community and saw the horror as the impoverished villagers  were shown their own shit lying in dumps around the edge of the village, they the NGO staff calculated the amount of shit  produced per year. The gathering was threatened with a public exposure of their foul ways on the local radio station, which depressed them further but the chief could think of no response. 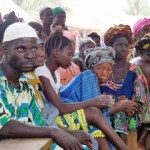 As they sat in a depressed state of anxiety wondering how on earth they were going to ‘stop eating their own kaka’, the joyous sound of their children rang out across the villages, as the school kids swarmed in to the centre of the gathering like an army of soldier ants singing to their parents, ‘Mama, Papa, Please build us latrines, we dont want to eat our own kaka’!   This wonderfully choreographed event was intensely moving, as we saw the parents face light up having been provided with a solution to all their insanitary ways, by their clever children primed and rehearsed by the team from the NGO. 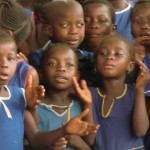 Within minutes the chief was on his feet vowing that latrines would be built immediately and there was no need to tell the world on the radio about the village unfortunate sanitation. The strangers went on their way vowing to return within a month to see if the villages had done what they promised. It was a brutal but effective handling of what would appear to be a sensitive subject to a society careful never to say the foul words in public – zero shit disposal.  But not with CLTS, which takes a subversive delight in embarrassing villagers into action and getting them to talk dirty, all in the name of improving sanitation.

CLTS  might be acceptable if the means did justify the end, but it seems this is not the ‘quick fix’ that many hoped it might be.  Behaviour change just isn’t that easy, and whilst latrines might pop up to save face, there is no attempt to keep them clean, let along rebuild them after the collapse with the first rains. It is estimated that only 30% of the villages that were successful in achieving ODF are still squeaky clean. In fact they never were completely ODF, as the term has come to mean anything from 38% – 78% coverage but never 100% as it would imply.

So as we went from village to village, seeing nothing but shitty latrines open to flies, and no attempt at handwashing or general hygiene.  It was  clear that a much deeper programme than latrine triggering would have to be done if hygiene standards were to be improved in the depths of Sierra Leone. There is simply no short cut to progress or good development.

Luckily our observations served only to confirm what most practitioners, both government and NGO have also realised – that the current CLTS has to be ‘evolved’ to make any long lasting impact on health. This was our task – to see how we could combine CLTS with the CHC approach to strengthen the levels of hygiene behaviour change.

It was therefore a relief to find that the CHC methodology which we had introduced in Sierra Leone in 2001, had a life of its own, and was quietly being used by CARE for reproductive health training with mothers clubs. We visited one such session and the contrast to the moronic CLTS session was striking. 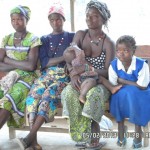 Here women sat together working out the intricacies of how to provide a balanced diet to wean children properly, and the meeting called on the  intelligence of the women and was clearly an enlightening and entertaining experience. The illiterate chief was present at the weekly session, a regular member along  with his wife.Afterwards we walked through the village and visited their  home  to find she had done the CHC WASH training years before and had an exceptionally  clean home – an example to the rest of the village.

The contrast between the two methodologies was striking:  CLTS – shocking and embarasing vs CHC  – intelligent and enlightening… which would you choose if you were a village women?

At the feed back workshop for the WASH sector in Freetown, we tried to paint a picture whereby the initial triggering of CLTS, so effective for mobilising the community, was used, not to build shitty latrines, but only to ensure ‘cat’ sanitation, the burial of faeces as well as to  encourage the village to form a CHC and start to got through a process of transformation which would be informed every week by facts and recommendations so that people could make informed decisions and build a decent latrine that would last and be replaced. A process of development  rather than bullying into conformity.

There is great scope for modifying CLTS into a more enlightened process, so that the shock and horror is turned into hope and knowledge. Only this way will CLTS succeed in changing people’s hygiene behaviour for long term sustainability of safe sanitation. It was encouraging that all the 50 participants from Government and NGOs  at the workshop endorsed our ideas and we look forward to piloting a way to elevate current WASH practice.