To reduce the vulnerability of at-risk rural populations in rural Masvingo to Water and Sanitation Related Disease (WSRD) transmission.

1)      To increase levels of Water, Sanitation and Hygiene (WASH) knowledge, attitudes and practices through Community Health Clubs and School Health Clubs so as to decrease vulnerability to WSRD transmission.

2)      To increase access to sufficient quantity and quality of water for drinking and domestic purposes through the rehabilitation of existing boreholes for communities in rural Masvingo affected by severe water shortages.

A lot of activities were undertaken during the reporting period since the last meeting. It is our great pleasure to inform the house that there were no cholera cases in the project area. However we remain vigilant in the face of reported  cholera and H1N1 cases in other parts of the district and nearby disticts with which we share boundaries. (221210 MoHCW WHO Zimbabwe Epidemiological Bulleting Number 88 Week 48).

CHC, SHC and CBM activities are running in earnest as the report will show.

A community driven baseline inventory was conducted at 3872 households by the 33 CBFs prior to PHHE sessions with the following results:

Many of these practices have beeen recommended by other projects that have been implemented here in the last few years as shown by the high pencentage of refuse pits pot racks,  covered water storage containers, individual cups. In addition it appears that  many kitchens are decorated and there are many nutrition gardens. There is also a  high percentage with knowledge of how to mae Sugar Salt solution. However there is still a gap where hand washing, water sources, use of ladle, sanitation coverage, and malaria prevention and control are concerned. The project will focus on these gaps and will  seeks to redress the knowledge and this will be evaluated at project end.

The project has now exceeded its project CHC target of 108 CHC as it now stands at 119 and still counting due to popular demand. Club membership stands at 5120 (360 to reach target) with sex aggregation at 1185 males (23%) and 3935 females(78%). Male participation is encouraging this part of the project as compared to other areas we have worked before. It will be interesting to find out what makes this difference.

9 SHC are running with a total club membershipof 1,115. They have just reopened after the holiday and more info will be available in the next meeting as they are settling down at the moment.

9 School headmasters participated in a day long WASH  in schools capacity building workshop we conducted and this was also attended by the District Education Office.

98 CHCs  (then) in the 6 wards were mobilized to commemorate hand washing day. The occassions were marked by public health promotion in the form of hand washing demonstrations, dramas, poems, songs and dance. ZimAHEAD distributed IEC materials sourced from UNICEF in the form of 400 t-shirts and thousands of pamphlets and posters.The objective was to completely cut out WSRD during the festive season and this was achieved as none were reported.

WPUC (Water Point Upgrading Committee)  trainings have started  with ward 30 where 21 WPUC were established . The other wards will be trained in due course. Rehabilitation will start once the WPUCs are trained. VPM (Village Pump Mechanic) tools sets were delivered from Oxfam and ZA is chasing the variances.

ZimAHEAD has procured the NFI (Non Food Items) vouchers and 3 suppliers have been identified as well as 1,700 beneficiaries drawn from the OVCs, the elderly, the chronically and the very poor as defined by the communities themselves. We hope to round up the process soon. What is left is the procument of soap. Close consultation with Oxfam is being maintained given the shooting prizes of soap on the market. 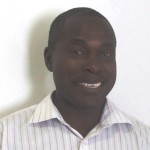 Notes from the Field
Regis Matimati, Director of Programmes Zim AHEAD
February 2011.
“The trip was fantastic.  I drove with the Directors of Ministry of Health and Department of Infrastructure down to Chiredzi. We got to the village to a gathering of about 40 club members.   I can’t start to describe the immaculate home and surroundings at the venue of the meeting. The kitchen, launch, temporary toilet, the flowers  around the homestead, the infectious singing and dancing by other club members and the high KAPB. both the Directors Mr. Goldberg and Sibanda could not help but heap praise on ZA and the community for taking the CHC method up.
….

We then toured another household picked at random and there we saw a self initiated permanent toilet which was constructed following CHC participation. The club member, an elderly male was so proud of his home and ZA. His wife stays in Chiredzi town to be close to the hospital as she has a bad case of  arthritis but the home looked so clean that one would think their was a maid doing the chores there but when asked the Sekuru (uncle) said “…..how can I leave in dirt when I am a club member?  ……   I attended the club to learn and after the lessons I can’t go back to dirt…” This bowled over both our visitors. The Sekuru’s children had even laminated Sekuru’s graduation certificate!
… 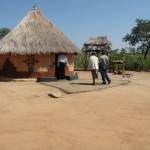 The next day we started by visiting the PMD (Provincial Medical Director) who was not in the office but we then met the PEHO Provincial Environmental Health Officer) and the Chief Hygiene Officer (CHO) and his team. The CHO, a
very charismatic man gave an update of ZA’s work in Masvingo. After that we went into the locations where we saw 3 clubs including a new one.
…
The Garikai club was a delight to see and the club leader gave a splendid over view of the project.  We then toured their area.
Everyone was impressed by the urban CHCs as they thought it was impossible for urbanites to form a strong community like that.