The Pride of the Poor: Garikai, Masvingo

Five years ago during the infamous Marimbatsvina Campaign, that eradicated most informal settlement in Zimbabwe, many shack dwellers of Masvingo Town found themselves homeless. Some of those displaced were finally given ‘core houses’, small two room boxes, on a patch of dry bushland on the outskirts of Masvingo, which although undoubtably better than their shacks, were without any sanitation or solid waste collection.  There was limited water with only a few communal taps for the 100 households that were resettled. Garikai became synonymous with the poorest of the poor in Masvingo, a place where no one was proud to belong.  The residents of Garikai felt ostracised by the rest of Masvingo town, as their place was considered a  filthy dumping ground. Litter was everywhere, and everybody agreed that if cholera was to start again, Garikai was the place where it would begin. 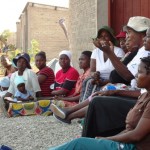 ‘Canaan our facilitator, is, how can I say … he is like God, because when he came there was only death, and now there is life! We people in Garikai now know how to survive! Those people in town they now respect us and our place is not looked down on as a dump anymore.’
Smoldering in the October heat, we were borne along on a wave of singing women and conducted round the dusty little settlement. We were infected by their own enthusiam and sense of worth and the way they had coordinated to clean up their place.  Not a single scrap of litter was to be seen, each house had a tippy tap for hand washing and, unlike many informal settlements where even soap cannot be left out for fear of theft, every tippy tap had soap and water.

They told us that 28 households had already built latrines and they were continuing to save so the rest of the settlement would have safe sanitation, but meanwhile they were practising ‘cat sanitation’ and burying their excrement. ‘You wont find a fly in Garikai’, they told us. Each home had a vegetable garden, and some had decorated each vegetable bed with used used cans. As there were not enough cans to complete the design,  one person had even collected used cans discarded in town and carted thousands home to decorate her yard. The effect of the cans and the carefully swept yards was almost like a Zed Buddhist garden, and the care lavished on this barren land was touching. All the women had joy in their hearts, were united in achievement and were delighted with the environment they had created.

We had come in the wake of a recent visitation to Garikai from the two of the most influential WASH officials in the country, the Head of the National Coordination Unit (NCU), Mr Bernard Mashingaidze, and the Head of Environmental Health Training in Zimbabwe Mr Naboth Mawoyo. They had returned from the field visit raving about the achievements of the Community Health Clubs. After years of trying to influence the top officials to adopt the CHC Approach throughout Zimbabwe, this first hand experience of Garikai may at last be the advocacy trigger for the institutioal scaling up the CHC Approach in Zimbabwe. They told Zim AHEAD that they would like  the CHC methodology to be integrated into the exisiting training for Environmental Health Techicians throught the country.