CHCs are spreading rapidly in Africa, but the question remains, ‘Can they appeal to more sophisticated rural communities in Asia?’   How can we adapt the CHC methodology to suit this very different scenario.

Since November 2009, when Ministry of Health (MoH) in Vietnam first decided to use the CHC Approach,  they have, without any external support from Africa AHEAD, simply got on with the job of establishing a pilot project in four provinces: Son La, Ha Tinh, Phu Tho, and Ninh Tuan. One of the initial barriers to starting up CHCs is always the lengthy process of developing a Toolkit and Manual, and this has been done in the past six months by Africa AHEAD, supported by Danida for Vietnam MoH. However having decided to ‘do’ CHCs, there was no sitting around in Vietnam whilst waiting for the training materials to be developed.

When I returned in July 2010 for the ‘start up workshop’ equipped  with the new manual and toolkit , we found we were lagging behind our participants, who said,  ‘Yes, interesting, we know all this, we already have CHCs!’  I was surprised to find that CHCs were not only formed up, but operating, and there are about 40 CHCs in total, 10 in each Province. Two provinces had already started the health sessions without assistence and had done 12 sessions, half of the course. They  had even developed a monitoring system based on the membership cards, having printed attendence books. Such is the power of an organised governmental system, where if the directive is given from above, the cadres below simply do it… no excuses, just get on with the job. From my experience in Africa where most external initiaitives, like a cow being driven to market on a long dusty road, need constant prodding by the driver, here I was runnng to keep up with the pace of the Asian buffalo, a symbol of hard work and fortitude in Vietnam mythology.

A field trip was arranged to go to Da Du village in Phu Tho Province, three hours north of Hanoi. We drove up to the village Community House in the evening, where hundreds of scooters were parked, whilst people squeezed into the hall, waiting for our party of 10 outsiders to arrive. The hall was packed with around 60 men, women and children, as fascinated to see us as we were to see them.   One after another,  men and women provided  the entertainment,  without a shread of self consciousness singing gloriously into the microphone.

The Master of Ceremonies was a dedicated community organiser and  a war vet with one arm. He introduced the community members: women bravely warbling out their strong patriotic songs full of love for Vietnam,  a man who played  a  mean mouth organ, which must have survived from the war against the American GIs in the 70’s and a more traditional musician playing a one stringed  instrument, adding a surreal Chinese tinge to our spirits which soured as each speech became more and more fired up with energy for the universal cause of Health for All by 2015.

They told us that they gather every week like this for one hour of song and the second hour of health education, and using the PA system makes it all the move enthralling. Karioke in Vietnam, like most of urban Asia is very popular, and here the rural folk were having home grown plugged in performance.

Under the sagaceous gaze of Ho Chi Minh, the saviour and hero of Vietnam, the times were a-changing, but really were they?  I couldnt help feeling the CHC approach fits perfectly into a society used to  celluar socialist organisation. In Africa  we have largely dyfunctional rural communities as the brain drain to the towns leaves the less able and more conservative in the ‘rurals’,  eeking out  a basic subsistence whilst living largely on remittances from their folk in town.

Here in Vietnam, one of the last communist countries, the north still operates from the top down and the people are organised by the party, and unlike Africa they are not disorganised communities in the rural areas.

The rural areas of Vietnam  are highly regulated,  with ‘mass organisations’ like the Womens Union, that plays a key role in development in Vietnam. The people have survived  years of war and poverty and in their desperation are highly motivated to progress. It appears they only need a good reason to get together with an agenda to improve and they will achieve.

Community Health Clubs resonate with their needs. Unlike the Womens Union which are purely for women, CHCs provide a forum for men and women to get together and solve some of their health issues together.

Our Vietnamese counterparts said that they had been ‘nerveous’ as to whether the CHC would work, but having seen this CHC in the flesh, they were now ‘confident of success’ of the Methodology. I felt just the same, with a new generation primed for take off. 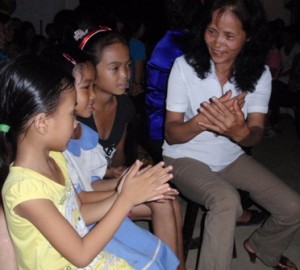