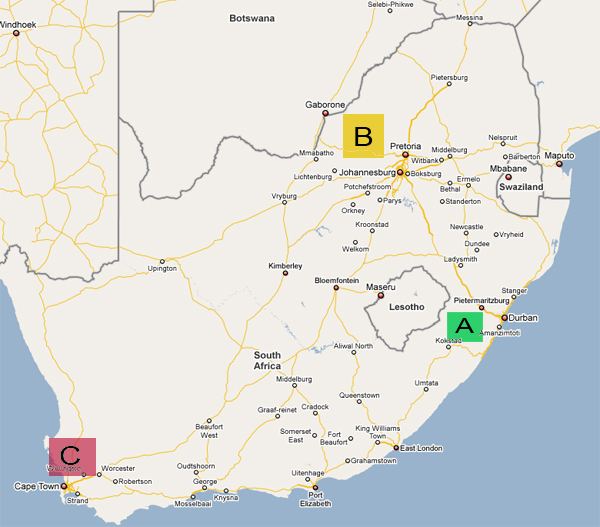 1.PHAST Manual and Tool Kit to enable scaling up of training 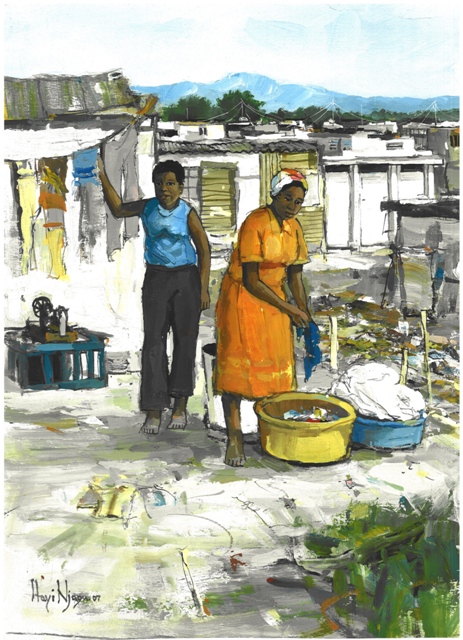 In 2008 Africa AHEAD, in conjunction with the City Health Department, developed and published a dedicated manual

This manual comes with a comprehensive PHAST Tool Kit for informal Settlements consisting of 13 essential topics related to home hygiene.

The training comprises of three Modules:

Module 1: Feasibility: the Rationale for the Community Health Club Approach

Module 2: Planning: How to start a Community Health Club Project:

A three day training for middle management and supervisors as well as the facilitators of the CHCs.

The first batch of trainees were passed after a six day workshop in March 2008, and are expected each to start one health club. Although the xenophobic riot of 2008 affected the start up of health clubs in many areas there is at least one success story in Phillippi. There are over 200 members in three health clubs and their training is providing an inspiration to replicate the project in other areas. In the near future all the CHCs will be assessed by Africa AHEAD with a view to learning lessons as to how the health clubs are being received in the Cape Flats. It appears that there have been several challenges including the difficulty of the members to meet during the xenophobic unrest that swept the informal settlements in South Africa last year. there are also concerns as to how the health club facilitators were supported and if there was enough supervision by Environmental health Personel to ensure that the sessions were heald as planned in the workshop.

Another training is to due to be hele in April / May supported by the Health Department , when the next intake of community members will be trained by Africa AHEAD to start Community Health Clubs in different areas.

In 2000, the South African Department of Water Affairs and Forestry (DWAF), with the assistance of the Royal Danish Government (DANIDA), initiated a program to pilot Integrated Water Resource and Management (IWRM) approaches in three Water Management Areas (WMA) of South Africa: the Olifants-Doorn (Western Cape Province), the Crocodile-Marico (North West Province), and the Mzimkhulu-Mvoti (Kwa-Zulu Natal Province). These WMAs were selected as they represent a cross-section of water resources conditions as well as water use conditions and user interests. Phase 2 of this project, which focuses more on direct support and partnerships at local, regional and national levels, was begun in 2006 and is set to last until 2010. For more information about IWRM activities in South Africa, please visit www.iwrm.co.za.

The CHC Approach will contribute to the goals of IWRM by building a strong foundation of knowledge, cooperation and behavior change in each of the targeted communities. This foundation will then be used to successfully implement a variety of projects such as rain water harvesting, nutrition gardening, income generation, HIV/AIDS case management, and improved management of sanitation facilities.

In May 2008, Africa AHEAD was invited to assess the feasibility of piloting Community Health Clubs (CHC) in targeted areas within the three WMAs. Between May and September 2008, stakeholders were engaged, situational analyses and site visits were conducted, and project proposals and plans were submitted.

Africa AHEAD has been contracted to implement a pilot project in the Mzimkhulu-Mvoti WMA, within the Umzimkhulu Municipality. Umzimkhulu which is located in the foothills of the Southern Drakensberg Mountains. Until recently Umzimkhulu was a part of the Eastern Cape Province, and as a result the levels of development in this district are far below the standards found in the rest of the Kwa Zulu Natal. According to the Municipality’s 2008 Integrated Development Plan, 40.2% of the population has access to piped water sources, with the remainder using unprotected sources such as rivers, streams and springs. In addition, while 92.9% of households reportedly have access to sanitation facilities, the majority of these facilities are neither safe nor hygienic. This low level of development is ideal territory to start a community health club programme as past research has shown.

The project in Umzimkhulu began to take shape from Septemeber 2008, as the Municipal Council approved the implementation of CHCs in all 18 Wards, a Project Steering Committee was constituted, the sites for implementation were selected and Africa AHEAD welcomed its newest team member, Mr. Moses Mncwabe, Project Officer for the Umzimkhulu project. The site selection process was a competitive one, with interested Ward Councilors submitting an application form indicating the communities they wanted to participate and the names of potential facilitators to be trained by Africa AHEAD. 10 Councilors who submitted applications, to join the programme and the Project Steering Committee selected one community and facilitators from each ward. Community Health Clubs have now formed up and facilitators have been trained in base line research. the base line survey was completed in January 2009, and the PHAST training is to be started in mid February, and continue every second week. Facilitators will then rely the training back to their ward where their health clubs will meet every week. The training will be complete with six months, by the end of August 2009.

Africa AHEAD is working closely with the South African National Non-Governmental Organization Coalition (SANGOCO) to start up CHCs through training the staff of existing local NGO’s in the North West Province and Gauteng. Unlike other projects which are implemented directly by Africa AHEAD, the input in this project is merely to train and mentor the staff of 3 local NGO’s, who will then manage the implementation and activities of CHCs in their catchment areas. While most of the CHCs in this WMA will be formed in communities in and around Mafikeng and Zeerust (North West Province), there is one Community Based Organization in Majaneng (Gauteng Province), near Hammanskraal, that will also be implementing CHCs.

NORTH WEST PROVINCE: Africa AHEAD will be collaborating with SANGOCO and two NGO’s based in the North West Province to implement CHCs, Tlhoafalo Advice Center and Lethabo Water and Sanitation. Each NGO will have between 7-9 staff trained in the CHC Approach by Africa AHEAD and will develop CHCs in 5-6 communities.

GAUTENG PROVINCE: Majaneng is a small rural settlement located on the border of the Gauteng and North West Provinces. In this area, Africa AHEAD will again be collaborating with SANGOCO and one local Community Based Organization, the Kekanastad Traditional Mothers Organization (KETRAMODEO). Africa AHEAD will train 5 members of this organization who will then develop CHCs in 5 sub-areas of Majaneng.

A three day training workshop was held from 11th-13th August 2008, on Module 2: How to start up Community Health Clubs. At this training the NGO staff were given activities to help map and analyse the areas to prioritise within their areas of operation. They were also trained to carry out a base line survey of 100 household in the selected area. This was done through the innovative method of using ordinary cells phones to capture data in the field. (See Publications, Rosenfeld and Waterken, 2008). The data is then automatically collated and preliminary result have been collected and a report issued by Africa AHEAD who are to process the data and provide on going support to enable any behaviour change to be measured effectively. The CHCs have now been formed up, the base line data collected and facilitators from the NGOs are now waiting for the next phase of the training which is being delayed by funding constraints. Local NGO are begging to start the next training as their communities have been mobilised and are loosing interest with such delay.

Brigham Young University, (on behalf of Rickett Benkisser) started a research programme in four informal settlements to establish whether the use of antiseptic cleaning material in home could reduce diarrhoea in low income homes. In order to conduct this research an intervention was planned to monitor 140 clusters in four informal settlements: Phillipi, Du Noon, Kwa 5, and Sweet Home. The model was that each of the 65 facilitators would hold weekly sessions in a cluster of ten homes. As the strategy was very similar to the CHC approach, Africa AHEAD was called on to help develop the training materials for the modules which were prepared by HPP. The beneficiaries of the programme were able to assist in the development of the PHAST Tool Kit and HPP supported the development of the illustrations, and HPP trainers were trained by Africa AHEAD to use the materials. Although this programme has now been completed, many clusters have become viable grass roots groups and anecdotal evidence is strong that they have improved in their home hygiene practices.

‘Community based PLA proved to be a powerful approach for reducing illness through supporting families in the adoption of new hygiene practices and in mobilising the communities for health and social change.

Reduction in disease
Findings from this paper indicate that Skin infections were reduced by 39.1% in formal housing but interestingly not in informal housing.

The concept of Community Health Clubs was first floated in South Africa in 2005, supported by the University of the Western Cape, in a pilot project in Khayelitsha, one of the most challenging informal settlements in the Cape Flats. 25 Facilitators were nominated by the Khayelitsha Sanitation Forum, and training was provided by Africa AHEAD. Due to insufficient support most of the health clubs never took off, but one determined facilitator has shown that CHCs in informal settlements can play an important role in providing support to the needy.

One of the facilitators, Saviour ran with the idea and mobilised a huge following of over one hundred members. trained the group over the next six months and Africa AHEAD was delighted to be able to provide certificates for the 25 core members who had completed every session. Some of the group have become voluntary clinical assistants, while another has started a play school and yet another has a voluntary service assisting the pensioners access their pensions and ensure they are properly cared for. The group has become a registered CBO called Philisanani and has recently secured government funding for a second training in home hygiene for which Africa AHEAD is providing certification.