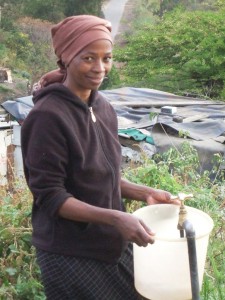 
The eThekwini Metro is giving Africa AHEAD the chance to pilot the CHC concept in one of the most challenging informal settlements in the City of Durban. The settlement is situated on a steep slope of a hill next to the Sea Cow sewerage works, which has long been a black spot in otherwise genteel suburbs, north of Durban. The authorties have supplied two ablution blocks, water and solid waste collection, but have been unable to get the residents to dispose of solid waste properly, whilst the facilities were constantly vandalised.The project start up due in February 2009, was delayed by two months as the election campaigning was taking place. A base line survey was done in March of 100 households in order to be able to present achievements of this pilot project to inform the Municipality of the feasibility of replication. It was found that employment was unexpectedly high and therefore the mobilisation of the community took longer than expected as it was difficult to get members to gather during the day when many were working. The process of getting the approval of the committee that runs this informal settlement involved further delays but this is now a great advantage as the the leadership are solidly behind the establishment of health clubs.

After six months there are some observable changes in the community. The upper Ablution Block is being better maintained and community pride is rising each week. In September a daylong clean-up was held with over 100 people participating and this has given the authorities the encouragement they needed to support the efforts of the residents of Joanna Road. Over 100 black bags were filled with garbage and the Municipality provided the collection vehicle.


It was also a good indication to see how one of the more squalid corners has been transformed into a vegetable garden. Plans are afoot to help all those who are active in the CHC to have a garden patch in the nearby wasteland. There is still a lot to be done to clean up the area and sort out the paths which become impassable in the heavy tropical rains. However the settlement is starting to enjoy the new community cohesion and the hope that CHCs will transform the area is likely to be met.