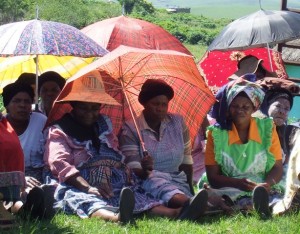 In January 2009, 10 communities within Umzimkhulu, one Local Municipality within the Sisonke District, began training as members of Community Health Clubs (CHC), a new initiative piloted by Africa AHEAD for the Department of Water and Environmental Affairs’ (DWA) Integrated Water Resources Management (IWRM) program. This Government pilot project, with funding provided by Danida (the Danish international aid organization), was initiated so as to improve community use and management of water resources. Since January, almost 1,000 community members have joined the ten community health clubs and have been meeting weekly to learn how to improve their lives through a structured health promotion program that encourages sustainable water, sanitation and hygiene behavior change. Now, seven months later, 550 members have completed the health promotion curriculum and are ready to celebrate their achievements during the Community Health Club Graduation Ceremony scheduled for Wednesday, September 16, 2009.

The Community Health Club (CHC) approach enables the poorest of the poor in urban and rural communities to take full control of their own development by building effective social structures at the grassroots level known as Community Health clubs. The CHC strategy and training pioneered by a South African NGO, Africa AHEAD Association, builds the capacity of communities to manage their own health and development, ensuring that all initiatives are fully sustainable and holistic in scope. Informed decision-making through active participation and consensus building, changes a loose connected community into a ‘real community’ with ‘Common-Unity’. The inspiration for the CHC concept is closely linked to the South African understanding of ‘Ubuntu’, community togetherness and mutual support, which is an indication of a healthy Community. This attention to social cohesion is the hallmark of the CHC strategy, which should ideally be a process of development that begins with health promotion and hygiene behavior change. Once club members have completed the health promotion activities, they are then encouraged to move on to larger and sometimes more difficult developmental challenges such as the provision and management of water and sanitation resources; sustainable livelihoods through skills development and agriculture; and social responsibility for less advantaged community members. This phased approach allows club members to build upon each successive achievement, building ‘Common-Unity’ along the way. 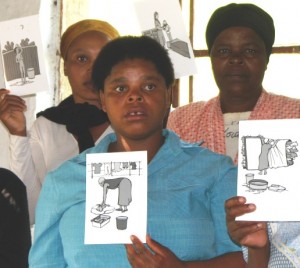 This CHC Pilot Project in Umzimkhulu took place from February to August 2009, with six months of health promotion sessions (Phase 1 of the AHEAD Model), where members were given the opportunity to discuss issues surrounding common health problems through the use of visual aids and participatory activities. Members were also encouraged to support each other as they put their new knowledge into practice at home, and within weeks it was possible see the changes they had made to their homes and lifestyles. These concrete changes are the observable indicators of this new ‘Culture of Health’ that the CHC Approach emphasizes. At regular intervals throughout the project, a household inventory was taken, which notes the levels of uptake of 10 recommended practices that are vital if common diseases such as diarrhea, worms and skin disease are to be prevented through improved hygienic practices. It has been proved that if these practices are widespread within a community, these diseases can be greatly reduced, with a consequent saving of lives and cost to health services.

To date, over 80% of all registered members are following the recommended practices promoted during the weekly health promotion sessions. These practices include the safe storage and use of water, improved kitchen hygiene through safe food storage, the creation of a dedicated hand washing facility with soap at or near household latrines, and the use of a safe water source. To begin with, almost all registered members now store their water in a safe and sealed container, fetch their water using a ladle or pitcher, and store all food in containers that prevent contamination by flies. In addition, whereas only 29% of member households had a dedicated hand washing facility near their latrine at the beginning of the project, 82% have now constructed a simple facility that allows them to wash their hands immediately upon exiting their latrine. Even more impressive is the use of soap for hand washing. Finally, while 38% of member households had soap for hand washing in February, 94% of member households had provided soap by the end of July. This huge change in hand washing practice together with safe food and water will insure there is a drop in the prevalence and incidence of diarrhea, one of the most common health problems which threaten young children especially in Umzimkhulu. With these changes occurring within participating communities, there is little doubt that family health has been improved where health clubs have been established.

As can be appreciated from the chart above, the Community Health Clubs have responded enthusiastically to the information they have been learning in their clubs and applying the knowledge to improving their home hygiene. Taking ten indicators of their response we find that from the first month (blue bars) to six months later (red bars) the change has been extensive. Firstly all ten indicators show that over 80% of all the members are following the recommended practices. Secondly if we take the average of all ten practices we find that there is 36% change in six months. Some of the practices were already quite high(above 60%) but even so, it is clear that the members who did not practice the hygiene at the start of the project are almost all practicing the recommendations now. We find almost all the members are now using safe drinking water, using a ladle to take water, covering their drinking water well, keeping their food well stored and practicing zero open defecation. Use of soap when handwashing has shot up a staggering 56% (from 38% to 98%), and 53% (from 29% to 82%) have constructed a hand washing facility. This huge change in hand washing practice together with safe food and water will insure there is a drop in the prevalence and incidence of diarrhea, one of the most common health problems which threatens young children especially in Umzimkhulu.

Most impressive of all, however, are the self-motivated improvements that some Health Clubs have made to their water sources. It was observed that at the beginning of the project that approximately 50% of participating households obtained their water from an unprotected source, such as springs, streams and rivers. After learning about the importance of obtaining water from a protected source (i.e. water that is sealed or protected from contamination at the surface) club members have been actively taking measures to protect their water sources. Two of the health clubs have even made technical improvements to protect their water without any financial or technical assistance from government. Each and every achievement of these Health Clubs highlights the objective of the CHC Approach, which is to help communities take their health into their own hands and manage their own resources more effectively, at least until government can provide the required services. 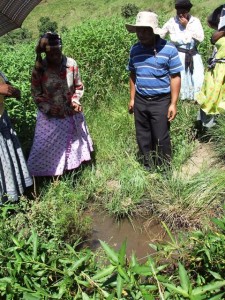 On Wednesday, September 16, 2009, over 500 graduates throughout Umzimkhulu will be honored at the Hall at the Umzimkhulu Teachers College. During this public ceremony, each of the Health Clubs will demonstrate to the rest of their municipality, district and province what it means to be a member of a Community Health Club. Prizes will be given for the best homestead and most proactive health club and there will be much celebration of good hygiene achieved. Songs about the importance of hand washing will be sung, dramas highlighting the knowledge shared and gained throughout the 7 months of health promotion will be performed, and all those who have attended all 24 sessions will be given a certificate of achievement.

Fig 3: over 50% of the health club members get water from a source like this.

This is not only the moment to celebrate the achievements of these CHC members, but it is also as a coming of age of each Health Club. As the project funders (DANIDA) and implementers (Africa AHEAD, and DWA) withdraw from their role as initiators of the scheme, local leadership is now set to take their rightful place as instigators of future development through the health clubs.While all councilors have been fully behind the clubs since their inception in their respective communities, the celebration being hosted by Umzimkhulu Municipality is a very public demonstration of this determination to support local community efforts and ensure every family has a healthy future. It is now up to the graduated membership to become the standard bearers of health and development for their community. Now is the time for these communities to demonstrate the power of Ubuntu that Nelson Mandela saw within each and every one of his South African brothers and sisters. With President Zuma’s clear focus on the welfare of rural people, the municipality of Umzimkhulu is set to become an example of sustainable development and how the combined effort of a critical mass of women can bring new standards of home hygiene and improved family health.