The Directors of Africa AHEAD, Juliet and Anthony Waterkeyn have recently been on a combined consultancy to Bhutan at the request of SNV, which is the leading development agency supporting Government in this extraordinary hidden Himalayan Kingdom.

The objects of the consultancy were twofold:

1. Anthony to assist in developing an appropriate design for Bhutanese sanitation;

2. Juliet to design a base line survey for measuring the effectiveness of the future two year health promotion programme. 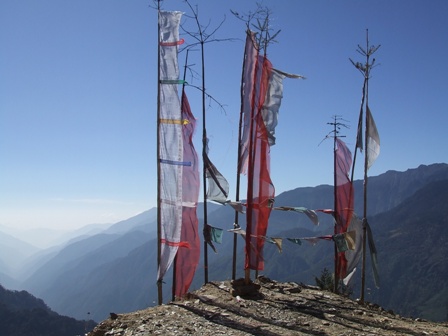 BASE LINE SURVEY OF HOME HYGIENE

The survey took place in the southern Geog (District) of Nangong, a two day drive from the capital of Thimphu in the far west- over the most massive mountain ranges and through the spectacular scenery to Permagatshel (Place of the Lotus) in the south east. This was not the end of the journey. The twelve enumerators and SNV staff then shouldered their rucksacks and set off on a four hour trek up another few mountains, while Juliet was provided with a long suffering mule to ferry her to the hidden mountainside where the survey was to take place. Ten days later the survey of 146 households had been done and the preliminary results were available. 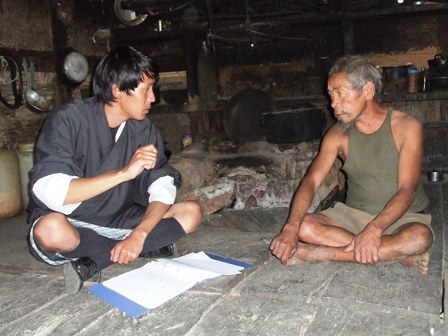 Anthony Waterkeyn had meanwhile been criss-crossing the country visiting schools and monasteries and households in the poorest settlements to assess the current problems with sanitation. Although Bhutan has made massive strides in the provision of water and sanitation to over 80% of its tiny population of roughly 650,000 scattered through this isolated Kingdom, the decrease in disease has been disappointing. Although latrines do exist in high numbers, there are many that are not used, and those that are used are poorly maintained, and seldom very inviting.

The current thinking in the health sector of Bhutan is that a strong health promotion campaign is needs and Community Led Total Sanitation has been proposed as a method, based on its success in neighbouring Moslem communities of Bangladesh.  However this approach can be misused and become a top down drive by local leaders which may not be appropriate in these gentle Buddhist communities, where rats cannot be killed as they too are sentient beings. Africa AHEAD is proposing the use of the CHC Methodology as there is little doubt that it would be culturally appropriate given the national value for Gross National Happiness.

Another outcome of this consultancy has been the design of a Beautiful Bhutanese Bathroom (BBB): this combines the effectiveness of the VIP latrine in reducing odour and flies, with a shower room, so that washing is encouraged given the added privacy. The squat hole is designed so that it can accommodate a pour flush system, and the squat hole can be exchanged for a seat for the infirm or disabled.  The external design of this versatile latrine matches the houses of Bhutan, one of the most beautiful styles of building to be found in an underdeveloped nation. The latrine is constructed of local wood which is used for the traditional houses. The forests of Bhutan are some of the most extensive in the region and are well regulated by the government   in this eco-conscious  nation. The idea is that toilets should not be an object of disgust but rather a status symbol: every bit as beautiful as the home. At the King’s request all the houses in Bhutan are in the national style of architecture which demands much painting with intricate religious symbols and even an un-Bhuddist eye can marvel at the most humble of dwellings. So the BBB design is not only practical but also in keeping with National values contributing to the unique concept of Gross National Happiness. It is hoped that the BBB may contribute towards the household’s everyday happiness by providing an appealing sanitary retreat, perhaps even a place of quiet meditation where one can escape from daily chores to enjoy a quiet moment to attend to one’s ablutions! 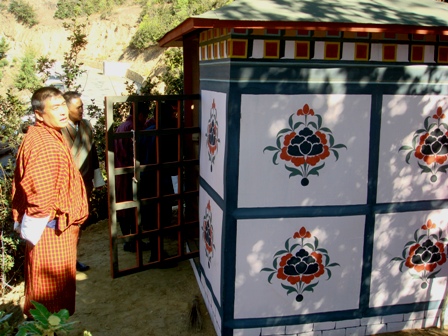